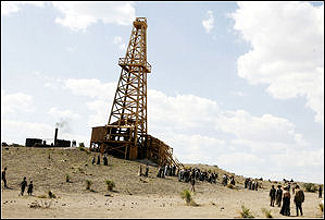 L'affiche qui tue.
"Give me all the bacon and eggs you have."
Top

Alors je viens planter ma tente avec toi.
"Give me all the bacon and eggs you have."
Top

There Will Be Blood rivals "Giant"; Day-Lewis brilliant


The secret closing-night film of Fantastic Fest 3 in Austin, Texas, on Thursday night turned out to be the first public screening of Paul Thomas Anderson's "There Will Be Blood." Certain to be rewarded with year-end accolades, Anderson's film is a true American saga - one that rivals "Giant" and "Citizen Kane" in our popular lore as origin stories about how we came to be the people we are. In "The Treasure of the Sierra Madre," it's not the gold that destroys men's souls but greed; in "There Will Be Blood," the commodity that drives the greed is oil.

Anderson was in attendance and answered a few questions following the screening. The film, which is based on Upton Sinclair's Oil!, really only uses "about the first 150 pages of the novel," according to Anderson. "The book goes on to Hollywood and Washington" and was just too expansive for his purposes, though he said that those opening chapters contained Sinclair's clear descriptions of the workings of the derricks and the precipitous moods that hung over communities that were about to sell their land to the oil prospectors. These are images that are also conveyed vividly in the film. Additionally, Anderson's usual mix of stunning landscape shots and long takes blend with his close-up scrutiny of the hidden meanings of faces and comportment.

Daniel Day-Lewis is at his brilliant best as the story's Daniel Plainview, a man whose humanity diminishes as his fortunes increase. Never an exemplar of human kindness, Plainview becomes truly monstrous by film's end. Spanning three decades from 1898 to 1927, the approximately two hour and 40-minute film begins and ends with Plainview as a solitary figure. In fact, the first 15 minutes pass without any dialogue. Community is merely a useful tool for getting what Plainview wants and needs. Another constant nuisance is religion and false piety, represented by the character, Eli Sunday, played by Paul Dano. That the film stars none of the director's recurring repertory of actors is another intriguing element that lends a fresh sense to the undertaking.

Essential to the success of the movie is the original score by Jonny Greenwood, the Radiohead guitarist and BBC composer in residence. In addition to some uniquely haunting orchestral arrangements, there's this insistent string motif that sounds like the buzzing of an insect inside one's head, a sound that grows louder and more unavoidably distressing whenever soulless events are about to occur. Greenwood's astonishing score is sure to be one of the most remarked-on aspects of the movie.