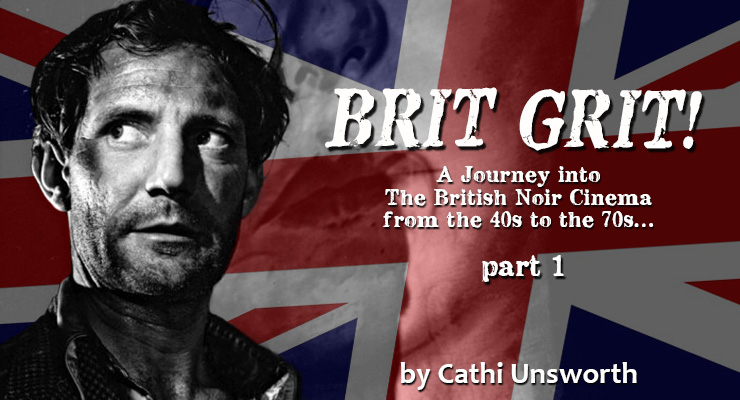 The British writer Cathi Unsworth is not only famous for her brilliant detective novels ("The Not Knowing", "The Singer", "Bad Penny Blues", "Weirdo", "Without the Moon"), but she is also a well-known journalist, music and film critic. Cathi Unsworth has notably worked for the British Film Institute’s DVD-Bluray new releases of forgotten masterpieces of cinéma made in the UK : Man of Violence and That Kind of Girl. So she offers us here a shrewd and well-written travel guide into four decades of British criminal movies. If it leaves aside no British Noir film masterpiece, it sheds a new light on many films that had fallen into oblivion and that undeniably deserve to belong to a relevant criminal film DVDthèque. Each and every title evoked by Cathi Unsworth comes along with the most recent available references in French if possible, otherwise in English.

Hard to imagine now, perhaps, but Richard Attenborough was perfectly capable of personifying evil and the first time he achieved it was in his seemingly effortless depiction of juvenile delinquent Pinkie in the first adaptation of Graham Greene’s peerless seaside noir. Ably abetted by a young William Hartnell, often a partner in the ‘Spiv Cycle’ of films that lasted from the post-War period to the late Fifties, the 23-year-old Dickie swaggers the boardwalks with a shiv up his sleeve and the gullible young Rose (Carol Marsh) on his arm, a baby-faced killer. The film’s ending may have departed from the book’s, at the behest of the British Board of Film Censors, but still retains a wholly fitting sense of disgust and darkest irony. The well-intentioned recent remake only makes you value this classic more. 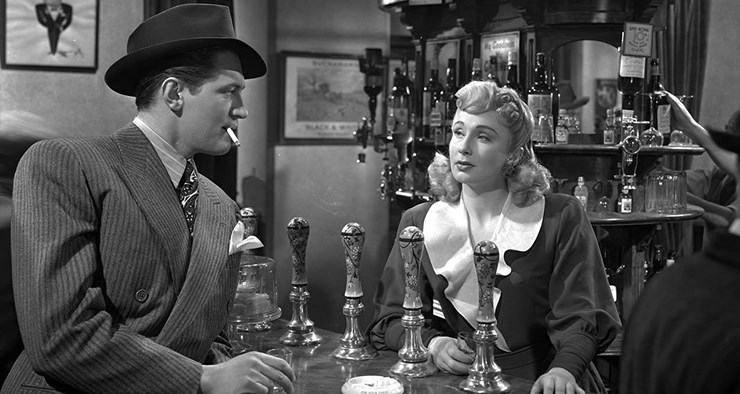 Trevor Howard is far from the romantic lead that Brief Encounter has sealed in memory in Brazilian auteur Cavalcanti’s audacious noir. As Clem, a former RAF pilot unable to adapt to civilian life, he takes up with bad boy Narcy (Griffith Jones, King of the Spiv Cycle) who runs his empire from a funeral parlour, where the coffins come in handy for all sorts of things and the signs on the wall remind everyone: It’s later than you think… This being Britain, class war soon erupts between the two over Narcy’s plan to start dealing drugs, with the result of Clem being framed for murder, banged up in Dartmoor and forced to follow in Tommy Swann’s footsteps and become the titular jailbreaker, hell-bent on revenge. The performances of the two leads, Noel Langley’s darkly humorous script, Margery Saunders’ super-fast editing and Otto Heller’s intense cinematography all add up to a dark star of post-War cinema.

Reed and cinematographer Robert Krasker made dramatic use of the city of Belfast to tell the story of the last journey of IRA man Johnny McQueen (James Mason), from city centre heist-gone-wrong to docklands denouement. The doomed man’s progress is seen through the eyes of the children who find him hallucinating in a bomb-shelter with a bullet in his guts; the English nurses who try and patch him up in their terraced parlour; the cabbie who unknowingly gets him past the cops; and the drinkers in the wonderful Crown Bar (landlord: William Hartnell). The surreal beauty of the piece is further heightened by the performances of stalwart Irish actors FJ McCormick as the wily bird-seller trying to profit from Johnny’s plight, WG Fay as his humane counterpoint Father Tom and Robert Newton as the mad artist who wants to paint the last moments of a dying man – inside a crumbling mansion, while snow falls through the roof. In all, it can be safely said that 1947 was a hell of a year for British film noir. 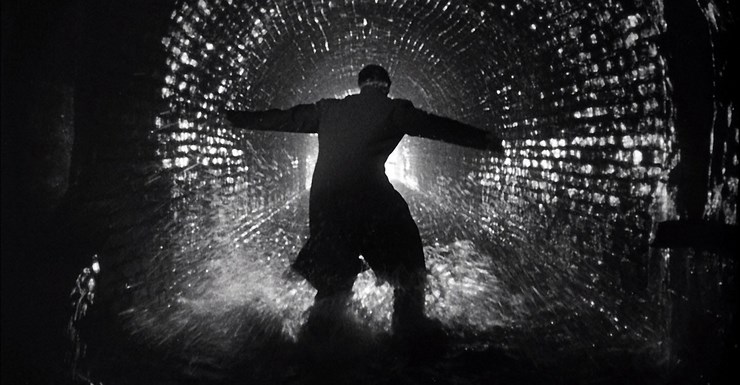 The second outing in this list for Reed, cinematographer Krasker and writer Graham Greene is a film which continues to haunt nearly 70 years after its release, a pitch-perfect depiction of bombed-out Vienna and its literal underworld in the aftermath of World War II. There is so much alchemy in this production it is hard to know where to start. Does its magic lie in the casting of Austrian actors Paul Hörbiger, Enrst Deutsch, Siegfried Breuer, Erich Ponto and the octogenarian Hedwig Bleibtrau, all allowed to speak in Viennese dialect with no dubbing or subtitling? The distinctive zither theme by Anton Karas, discovered by chance, playing for tips in a Viennese café? Perhaps it’s the climactic chase through the sewers? The veracity of Greene’s plot about a penicillin racket run by charismatic psychopath Harry Lime, a man based upon the author’s former MI5 spymaster Kim Philby? Or Orson Welles as Harry, appearing from the shadows with a smile upon his lips? What do you think, old man? 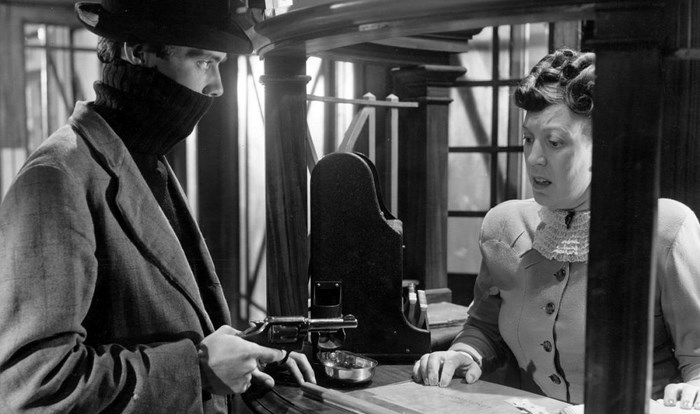 Prompted by the murder of Alec D’Antiquis, shot in cold blood by a gang of robbers in 1947, this film tapped into public fears of a London rife with ‘cosh boys’ armed with the weapons that were so easily available after the War. Dirk Bogarde plays Tom Riley, a dark, unknowable young sadist – the sort of role he excelled at. Trying to keep the streets safe from this likes of him is Jack Warner as avuncular PC George Dixon and Jimmy Hanley as his youthful protégée, both vastly different characters from their last meeting in It Always Rains on Sunday. This could almost be an Ealing comedy, but for the sudden, shocking twist of Dixon’s murder at the hands of the coolly dispassionate Riley. Dearden – a lynchpin of British cinema for the next two decades, until his tragic death in a car crash in 1971 – uses great location shots for the car chase down Ladbroke Grove and climax at White City dog track, with the tic-tac men choreographing Riley’s impending doom. Dixon proved so popular that he was resurrected for a successful TV series, Dixon of Dock Green, that lasted from 1955-1976. 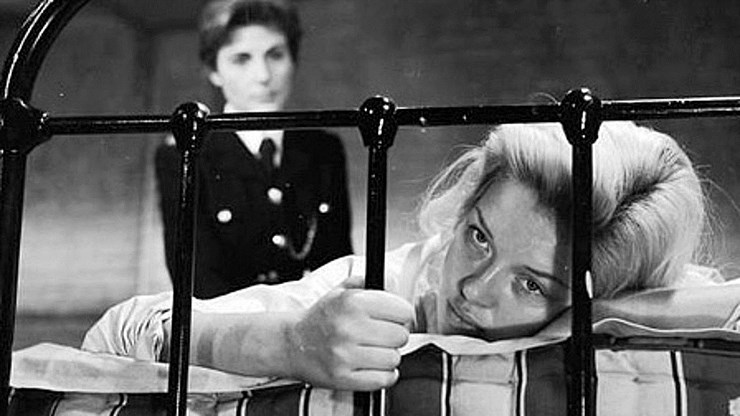 Diana Dors was Britain’s answer to Jayne Mansfield, a blonde bombshell with a wicked sense of humour. But it wasn’t until Thompson cast her as murderess Mary Hilton, condemned to death for shooting her lover, that the full range of her acting depth and talent was revealed. From the stark surroundings of her death row cell, Mary’s story is told in flashback, with many echoes of the true case of Ruth Ellis, the last woman to be hanged in Britain: an affair with smooth-talking nightclub pianist that turns to jealousy, paranoia and ultimately, a smoking gun. It was to Dors’ credit that her rendering of the vulnerability under her character’s hardboiled exterior hit such a chord that the film became an effective tool in the campaign to abolish the death penalty. It also brought Thompson to Hollywood, where he would go on to direct one of the most astonishing noirs of all time, Cape Fear with Robert Mitchum, in 1962. 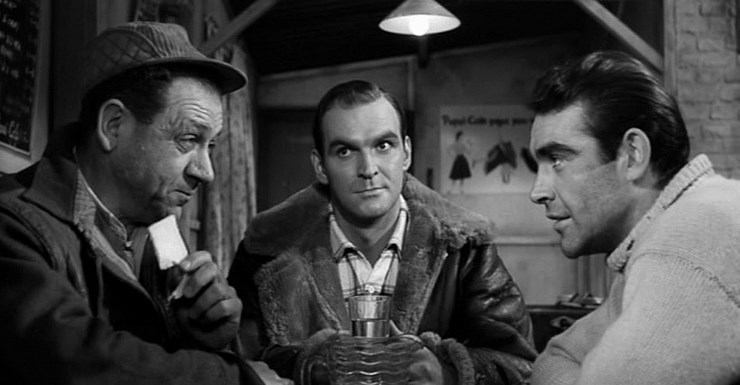 ‘Manly’ Stanley Baker, the son of a coal miner from The Rhondda, was the alpha male of Fifties/Sixties British cinema. Even a youthful Sean Connery, appearing in one of his first roles here, seems a bit fey beside him. As ex-con Tom Yately, Baker picks up a job as a lorry driver for a haulage contractor, hoping just to keep his head down and gradually rebuild his life. Unfortunately, his boss Cartley (William Hartnell again) is as bent as they come, and working a scam with his top driver Red (a homicidal Patrick McGoohan) that results in such cinematic luminaries as Baker, Connery, Herbert Lom, Sid James and David McCallum having to drive tons of gravel at alarming speeds down perilously narrow and winding country roads. The strange setting, amid the frantic pace of the post-War rebuilds, authentically renders the itinerant lives of the drivers, with their long days at the wheel and nights in the alehouse, and makes this oddball, gritty drama really work. 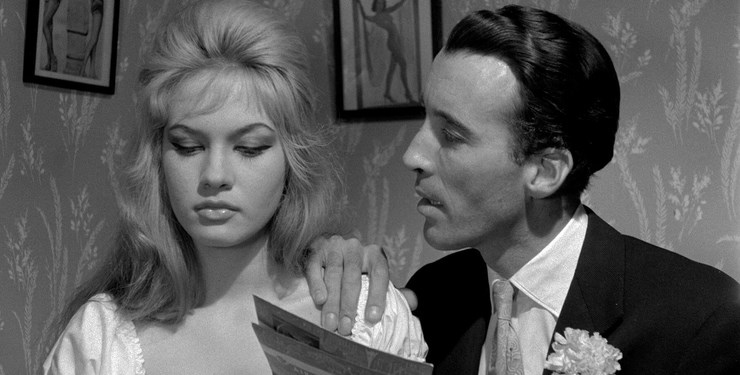 A heady cocktail of beatniks, property developers and strippers mixing it in Soho to the sounds of the John Barry Seven. Beat Girl slid in some sly social commentary amid the wild antics of the titular Jenny Linden (Gillian Hills, the English Bardot, who would ironically find more success as a ye-ye chanteuse in France) and her teenage rebel crew, who also numbered singer Adam Faith, a youthful Oliver Reed and Shirley Anne Field, without whom no teensploitation film of the period could properly be made. While Jenny lives for kicks, racing cars, playing chicken on the railway and getting involved with sinister strip club owner Christopher Lee, her architect father Paul is busy constructing the concrete City 2000 from his luxury Kensington mansion. While a stripping sequence involving a boa constrictor saw the film heavily cut on release, the car chase scene was later mirrored in Stanley Kubrick’s A Clockwork Orange (in which Hills also took a role), and John Barry’s score is still straight from the fridge. 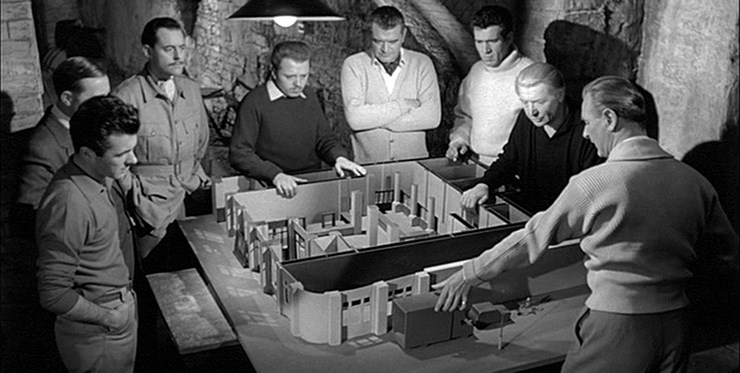 The League of Gentlemen (Basil Dearden, 1959) We are now entering a period where most of the best British movies will involve the trinity of Basil Dearden, Bryan Forbes and Dickie Attenborough. In this, Dearden directs, Forbes writes the scathingly witty screenplay and both he and Dickie star in the gang of compromised ex-servicemen recruited by the disgruntled Colonel Hyde to pull off the perfect bank job. The ensemble cast – the awesome Jack Hawkins as the Colonel, Nigel Patrick as his louche adjutant Major Race (a man with many similarities to Harry Lime), Terence Alexander as chinless wonder Major Rutland-Smith, Roger Livesey as faux clergyman ‘Padre’ Mycroft, Forbes as feckless nightclub pianist Captain Porthill, Dickie as randy garage mechanic Lieutenant Lexy, Kieron Moore as closet homosexual Captain Stevens and Norman Bird as the browbeaten Captain Weaver – are all superb, as is every minute of the film they inhabit. Ostensibly a heist movie, this is really an inspired satire on the end of Empire that catches the mood of change in British society as the Sixties began.

Back to French version